skip to main | skip to sidebar

I've made some comparisons before, but here are pics with painted units of AB and Old Glory 15s. The units are comparable size wise, and work well on the game table in the same miniature armies. The styles are very different, however. So is the level of detail. In the pic below, the figures to the left are AB, and the figures on the right are Old Glory. Both are figures of Portuguese line infantry. 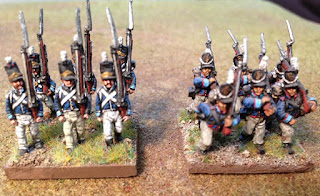 The next pics are British artillery - AB horse artillery on the left, Old Glory foot battery on the right. One thing about the Old Glory figures is that the gun tubes are not particularly good - every once in a while the castings are off and the top and bottoms of the gun tubes don't line up.

Lastly, there are the cavalry figures. The AB figures are British dragoons in Tarleton helmets, and the Old Glory are later British dragoons in shakos. For me, the crucial difference between the brands is the quality of sculpting in the horses. While Old Glory is perfectly functional (and let's face it, no one stoops down to inspect the horses during a game), AB horses are extremely well sculpted and cast. 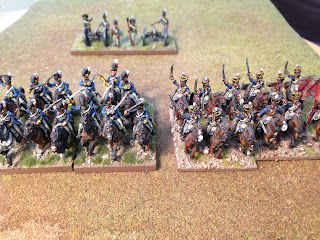 One trade-off between the brands is that Old Glory tend to be much faster to paint for a guy like me, because when I have a figure with a high level of crisp detail, I paint as much detail as I can. If I were building an army for use in relatively short amount of time, I'd go with Old Glory. Here are some Old Glory 15mm ACW Confederate figures as seen from the "three foot rule." These were simply blocked in color, Army Painter Quickshade (dark tone), and a couple of highlights for the flesh areas - and boom - done. These took only a few hours to paint, and for gaming purposes look just fine. 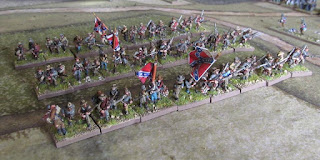 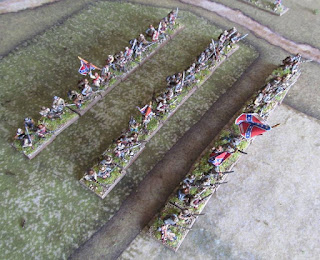 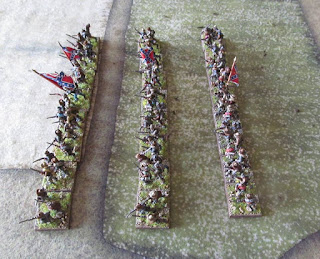 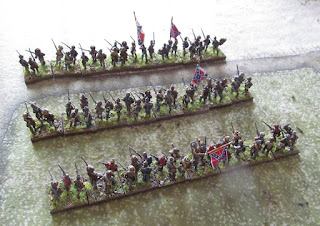 Check out Blue Moon as well. Still a growing line but a good compromise between AB and Old Glory.

This a new start to yer blog Mark?

viagra said...
This comment has been removed by a blog administrator.
1:33 AM

your miniature-painting is absolutely stunning and among the best I have seen in the net so far! I mean - this is 15mm scale looking like 28 mm! I can 't open the pictures of your painting tutorial in the beginning of the blog - maybe you could do a new one some day...? Your work is absolutely inspiring and a joy to study - wish you would post more!

Best regards across the big pond!